Mah Jong is a dying game. Most CBCs (Chinese Born Canadians) don’t know how to play, including myself. But I’ve been hearing more and more that playing Mah Jong is good for your memory and for preventing dementia. This weekend, my sister and I took our yenyen to our friends Jenny and Johnathan’s house to play, though I was just watching. In recent years, there have been signs of dementia showing in my grandma, but she was sharp as a tack once they started the game, at times even correcting everyone else! Mah Jong also always goes hand in hand with food. Anytime there is a game, there is a meal. And thanks to Jenny, we were all well fed too. 🙂

Here’s a few pictures of yenyen in action…

Thinking about her strategy 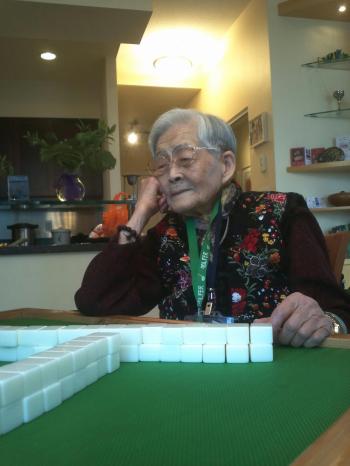 I know most of the tiles…

…and the concept of pong, seung and kong.

But beyond that, I’m generally lost, especially on how to win. So Johnathan, the Brit who learned how to play in the past few years, made me a copy of his cheat sheet for calculating points for winning combos. Feel free to use it and let me know if you have any questions. Also, just note that this is only ONE of many ways to determine points.

Next lesson, we’ll go over some of the rules of the game with some action shots and some food shots too!

Do you know how to play Mah Jong? Who do you play with? Are you interested in learning and/or playing with others? How did you learn how to play?

This entry was posted in Uncategorized. Bookmark the permalink.