I’ve slowly been getting more and more responses from people interested in participating in the Intergenerational Chinese Community Kitchen Program! Unfortunately, we haven’t started just yet as many of the seniors have been busy going on outings as the summer programs at Strathcona Community Centre have been ramped up. We’re working on the logistics of when both the seniors and the kitchen will be available so hang tight!

In the meantime, as the number of interested participants grow, I’m putting together an email list to keep everyone up to date once a schedule is put together.
If you want to be added to the email list, just send me one at d3chow@gmail.com. I’d be happy to hear from you!

Even my 2 year old nephew likes to cook Chinese! As he sings in the song, he’ll even wash the dishes =)  He sings in Cantonese but an English translation follows in case you want to teach a little one you know. Enjoy!

Translation of lyrics:
Chow Fan, Chow Fan
Add some soy sauce
Add an egg
A bowl for you
A bowl for me
Finished eating and full
You wash the dishes!

So this past weekend, my yenyen, sister and I attended the Hoy Ping Benevolent Association dinner and we met lots of people. Since there was a big audience (about 450 people) at the dinner, my sister and I decided to seize the moment and appeal to the young people in the room. We asked our good friend, the chairman of the Hoy Ping Association, to allot some time for us to go on stage and speak to the crowd. Although the room was loud and not too many people were listening, we had a rare opportunity to chat with NDP-MLA Jenny Kwan, Vancouver City Councillor Raymond Louie and Councillor Kerry Jang. I also hung out with the association’s Kung Fu club as they showed a great slideshow of the team’s part in the Chinatown Parade back in January. And it seemed our appearance on stage worked. In the last 15 minutes of the dinner, Janet approached our table to chat! Thanks Janet!

Unfortunately, in all the excitement, I forgot to take pictures… Please forgive me, I’m still trying to get used to blogging and taking pictures of everything I’m doing. But hopefully my BBQ Pork “Fly” Rice recipe will make up for it. 🙂

This recipe is the first Chinese dish I ever learned to make. When we were growing up, my mom would go play mahjong on the weekends (and as you probably know, serious mahjong games run for at least 4 hours) and had to make a quick meal for us before she left and it was often BBQ fried rice. Aside from the BBQ pork, all the other ingredients are already often found in most Chinese kitchens, or at least ours anyway.

These days, fried rice has entered the realm of westernized Chinese food, being lumped into the same camp as sweet and sour pork, chicken chow mein and egg rolls, but not so! Fried/sticky rice is served at big banquet meals, albeit at the end. At more formal dinners, rice and/or noodles is served at the end as a filler after you’ve enjoyed the real dishes of sea cucumber, crab, duck etc. So, this dish can be made in a snap for a quick meal, like I did last night, or to accompany a formal dinner.

BBQ Pork “Fly” Rice
2 cups (muk) rice
1/2 lb BBQ pork
1/2 an onion (red or white, doesn’t really matter) or 1 shallot or 3 scallions
1/2-1 cup frozen peas
8-10 frozen tiger prawns (or fresh, but it would be a waste)
2 eggs, beaten
1 1/2 tsp hoisen sauce (often called oyster sauce)
1 1/2-2 tblsp of oil ie. vegetable or grapeseed, not olive oil or peanut as these have too much flavour
Wash 2 cups of rice in cold water and cook. The most common way to cook rice these days is in a rice cooker, but if you have a ceramic pot, it supposedly tastes better, you would just have to time it. For fried rice, the best is actually to use old rice because freshly cooked rice sticks together. If you’re using freshly cooked rice, make it as early as possible, then fluff with chopsticks and cool the rice for as long as possible. 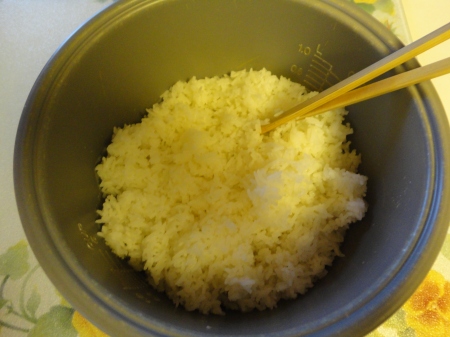 While the rice is cooking and cooling, defrost the frozen peas and tiger prawns, I just do this in a bowl of water and it doesn’t have to be completely defrosted, just enough so there’s no ice and they’re free. Dice the onion/shallot/scallions, whichever you’re using, and the BBQ pork. Once the prawns are defrosted, drain the water then peel and cut into 1/2-1 inch pieces. Drain the peas once they are defrosted. Set up all your ingredients so they’re convenient as you’re cooking.

Once the rice is cooled and ready to go, take out your wok. Ideally you use a wok since it’s superior to the frying pan due to it’s size, efficiency and versatility, but if a frying pan is all you’ve got, it’ll do. Just use the largest once you’ve got.

1. Onions – cook until it smells so good you’re tempted to reach into the wok with your bare hands for a taste… or until slightly golden.

2. Tiger prawns – prawns are cooked once they turn orange. DON’T cook them all the way or they will be tough and stringy by the time you’re done. Cook them until you start to see some orange.

3 & 4. Peas & BBQ pork – just toss ’em around so they heat up and the flavours of each ingredient are distributed. After a while, you may begin to notice that the bottom of the wok is sticking, this is because of the sugar from the BBQ pork burning. Turn down the heat to med-high. My idea of med-high is 7-8.

5. Rice – dump all the rice into the wok and using the blade of your spatula, break up any clumps. 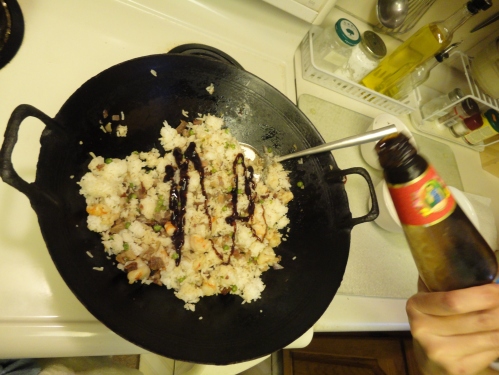 6. Hoisen Sauce – drizzle over top and toss until the sauce is evenly distributed.

7. Egg – this is the part that makes it fried rice and is the last step. Pour the egg over top and toss vigorously. If you let it sit for too long, the egg travels to the bottom of the wok and cooks by itself, resulting in scrambled eggs. What you want is for the rice to be coated in egg. 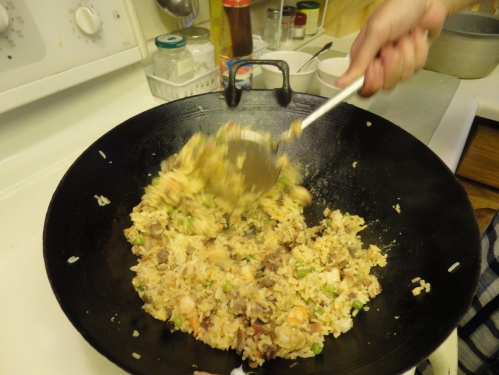 Keep tossing until the egg is cooked and the rice doesn’t look wet with raw egg.
If you’re not eating the rice right away, I like to keep it warm in the rice cooker, but fried rice to me is like pizza, it can be enjoyed hot or cold. 😉
This is the first time I’ve ever taken pictures while cooking and giving directions for it so feedback is welcomed and strongly encouraged! Also, if you try the recipe out, please let me know what you thought of it, or if you made any modifications. I’d be happy to hear from you!